February 23rd may have brought Storm Doris to the UK, however in South Devon we were blessed with a sunny day (although windy) that brought an unusual visitor to our coastline. 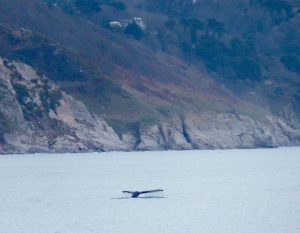 m). It was initially thought to be a Minke, but has since been confirmed by Brixham Seawatch as a Humpback- a rare sighting for the South Coast of Devon which initially lead to concerns that it may be in trouble since it should be much further North out in the Atlantic.

In the early morning sun on the 24th Feb we spotted the whale at Slapton Sands, where it was close enough into the shore to see it spouting water and breaching the waves. The children were beyond excited as they watched with their classmates before school in the morning and again in the twilight as the lighthouse beamed across the bay. Once again we marvelled at how blessed they are to grow up in natures playground where they have the chance to run free on the beach where the 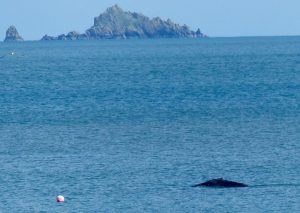 Over two weeks later the whale is swimming strongly up and down the coastline and appears to be feeding on the glut of sprats, accompanied by porpoises, seals and gannets.  Quite the wildlife show every day!  The British Divers Marine Life Rescue have stated that it is healthy and is feeding in the shallow waters on shoaling fish. They also state that “in recent years there has been an increase in sightings around the UK.  Most of these have been in Scotland where they would be expected, but humpbacks have also been recently spotted off the coasts of Cornwall, Devon, Kent, Suffolk, Norfolk, Yorkshire, Northumberland and the North West.  This may be due to a good supply of prey, but also may indicate a recovery of the population since the whaling moratorium in the 1980s, with animals returning to feeding haunts of old”.

The whole local community are enjoying the spectacle of this living nature documentary! The memory of the day the whale came will stay with our awestruck children for the rest of their lives, reminding us all to love and protect our beautiful coast and marine environment. 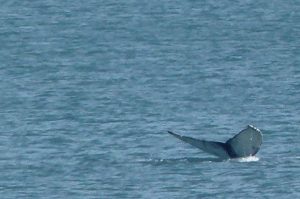 Humpback whales range in length from 12 metres to 16 metres and weigh about 36,000 kg. Sadly, there are very few Humpback Whales left, with scientists estimating that there can’t be more than 15,000 of them in the world.

Photo credit to our friends at Forest and Beach http://www.forestandbeach.co.uk/– an outdoor education centre and forest school provider in our village of Beeson.

A century ago one of our local fishing villages was struck by disaster. South Hallsands was one of several small communities dotted along the coast that relied on the sea for its living and supported 128 inhabitants, 39 houses and a pub.

In the 1890s it was decided to expand the Naval dockyard at Devonport,  Plymouth for which sand and gravel was needed.  Dredging of the shingle bank began offshore from Hallsands in 1897 and soon up to 1,600 tons of shingle was being removed each day. Much to the alarm of the villagers the level of the beach at Hallsands began to drop. In the storms of the 1900s some of the sea wall protecting the village washed away, causing villagers to petition their member of parliament and complaining about the damage to their properties. In 1902 the dredging licence was revoked and the beach level recovered somewhat.

On the fateful night of January 27th 1917 a combination of strong easterly gales and an exceptionally high tide ripped through the village. Seawater swirled through the houses, enveloping the village and wreaking a trail of devastation. By midnight four houses had gone. 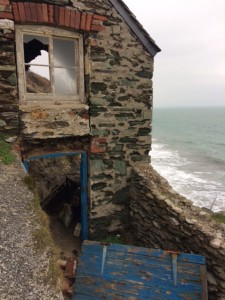 The inhabitants gathered the few belongings they could and assembled on the cliff tops above to watch the horror unfold. By the end of the night only one house was left standing. Miraculously no-one lost their lives.

The villagers fought for compensation for years and many resettled in North Hallsands and Beesands.

Today, there is a viewing platform at Hallsands where visitors can learn the history of the village and look out over the ruins.

To commemorate the centenary of the disaster the occupants of the remaining house (used as private holiday home) allowed guests to come in to the old village (at their own risk!). It was a suitably atmospheric day- the 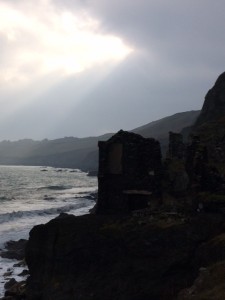 sky was grey and the wind bitingly cold. It was fascinating to step back in time and to visit the old village, to pay respects to those who had their

livelihoods taken from them and to consider the impact mans actions can have on the natural environment.

You can listen to the dramatisation of the catastrophe on radio BBC 4 extra here http://www.bbc.co.uk/programmes/b0076cd9

Young readers may enjoy “Wings to fly” by Patrick Cooper, a touching story about the night of the storm.